Fatima, the Virgin of Abu Ghraib 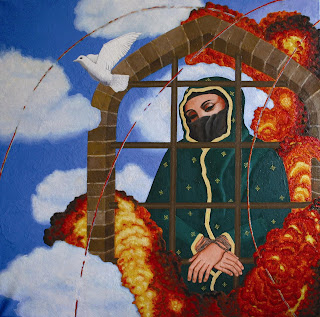 This painting is dedicated to Fatima, an Iraqi woman who was held in Abu Ghraib Prison*.

Fatima was arrested sometime in 2004 and managed to smuggle a letter out to her family. Here is an excerpt from her heart-wrenching letter:

“… I am your sister in God (Fatima). They raped me on one day more than nine times. Can you comprehend? Imagine one of your sisters being raped. Why can't you all imagine it, as I am your sister. With me are 13 girls, all unmarried. All have been raped before the eyes and ears of everyone… Brothers, I tell you again, fear God! Kill us with them so that we might be at peace. Help! Help! Help!”

Fatima's elder brother organized a hundred men and launched an attack on the prison; Fatima was struck fatally in the head during the bombardment and died on December 21, 2004.

The case of Fatima is not unique; many Iraqi women have sent messages begging loved ones to ‘please kill us all.’ U.S. guards are perpetrating systemic abuse and torture against Iraqi women who are held in indefinite detention without charge; this is happening not just at Abu Ghraib but all across Iraq.

In my opinion, the rape of Fatima was one universal rape of all women of this world that cuts across all races, colors, ideologies and creeds.

This author painted Fatima's Story, investigated and reported her Story in the hopes that MAN(humankind) will never again, I'll repeat this, NEVER AGAIN view the rape of women during times of war as a conqueror's perk or privledge. The consequences of this type of despicable behavior for the perpetrator and the victim are oftentimes worse than death. ENOUGH, NO MORE!


* Abu Ghraib prison is located in Iraq and came to the notice of the world when the New Yorker article by Seymour M. Hersh of April 30, 2004 publicized several graphic photos of prisoner abuse by personnel of the U.S. armed forces, CIA officers and contractors involved in the occupation of Iraq.

Update 01/2007: As far as the Fatima story goes, two months ago a jihad video was published, a Saudi Arabian came to Iraq, and was filmed: post-posthumously-marrying Fatima, then strapped on explosives, and into the streets blowing up himself and others. This is aside the fact that every Islamic newspaper (Indonesia, Pakistan, Persia, and Arabic countries), has been covering the Fatima story extensively – publishing letter, prison bombing, funeral, interviews with neighbors, etc.

Comments:
Hi there mates, its wonderful paragraph about cultureand fully defined,
keep it up all the time.